Here’s the thing. As hard as it is to admit to a parenting mistake, I’m going to tell you that for the first two and a half years of Carl’s life, I made a pretty big error. Yep, I said it out loud for all of you to hear (here come the Mommy Shaming trolls with their popcorn). Why am I opening up my inner thoughts to share my mistake with all of you? Because I hope that you can learn from my mistake.

Did you have a parenting method that was working great for you when you just had one child and then suddenly when number two came around you turned to your significant other (or self) and said, what the hell was I thinking? I never even noticed my mistake until Jack came around.

You see, I used to help Carl with every. single. thing. When he called, I ran to him immediately. I didn’t wait five seconds or ask him to try it himself first. Instead, I stopped whatever I was doing and rushed over to my precious child to solve his problem. Block tower fell over? No problem, Mommy will fix it. Can’t reach your cup on the counter? Mommy will get it. Need something else to eat for lunch? I’ll stop whatever I am doing and make you something in a matter of seconds so that you aren’t without food for more than a minute (I don’t want you to starve). Need a boost to climb up the stairs at the park? I’m right here to push on your little butt to get you up over the hurdle.

It didn’t matter what he needed help with, I was there. I took my perfectly capable child and made him incapable of doing anything on his own. By simply doing things for him and helping him as quick as possible, I was enabling him.

And then I had Jack. My parenting decision (or lack there of), caused my oldest boy to scream at me for help for what felt like hours minutes at a time while I was nursing his newborn brother. He looked at me with those big blue eyes and was completely lost. Without my help, he had no idea how to function. What should he do next? How could he get his water cup? Or how would he pull himself up onto the playground?

Now, part of me knows some of it was parenting and some of it was also personality. My oldest is a people pleaser. He is an old soul and is so endearing. Until he was about four and a half, he wouldn’t even climb out of his bed at night if he needed to use the bathroom or had a bad dream – instead he would call to us to ask permission. When you told Carl no, he listened. Also, he is not naturally adventurous (which may or may not be due to him falling down some stairs and breaking his ankle at 15 months – it took a lot to convince him to walk again). It’s that whole nature vs. nurture argument that makes it complicated when we reflect on our parenting choices (which I do often, even though I probably shouldn’t). Did we do something wrong, or is that how our child is built?

As a new Mom, I was terrified that I would break him. You see, it took a lot for us to get Carl. We had losses and years of trying to conceive, until we finally got our beautiful rainbow baby boy. I may, or may not have, treated him like he was the most precious thing on Earth for the first year of his life. I never want to take for granted how lucky I am to be a Mom. So I helped him. I didn’t want to watch him struggle or fail. Or worse, get hurt.

It’s easy as a new Mom to want to help your child with everything they do. The last thing you want is for your child to be without or to feel like you aren’t needed. The problem is, there is good help (getting the snack that’s on the top shelf in the cabinet) and then there’s unnecessary help (like fixing his block tower after it’s fallen). As a parent, it’s a balancing act to decide what your child truly needs help with and what, if given time, they can do for themselves, even if it means they struggle a little.

Now, times have changed in our house. When Carl or Jack ask for help, unless they can get hurt, I ask them to try it themselves first. Sometimes, Carl will ask me why I won’t help him. And my response is always a version of the same line, “it’s not that I don’t want to help you. It’s that I want you to learn how to do it yourself.” Most of the time, he’s okay with that answer, other times he gets frustrated and makes an angry face at me (I have to remind myself that it’s okay, I am his Mom, not his best friend).

So what are some things you can try to encourage independence?

So when you look down at your adorable new little baby, try to remember that it’s okay for them to fail. You don’t have to do everything for them. Taking chances is part of life. Failing is part of life. By protecting our children from failure, we are creating enabled, incapable children. Instead, provide them with the support to know that if they do fail, you will be right there to help pick up the pieces and wipe away the tears. 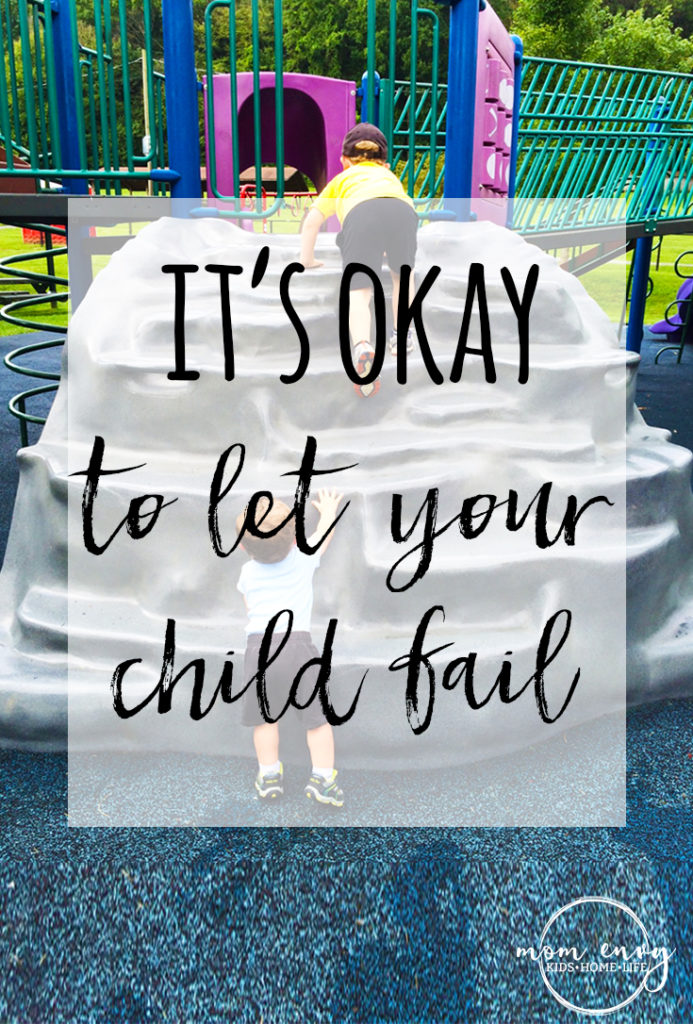 Terrific article Laura! You're doing such a great job with your boys. Aunt Laura

I totally agree, but don't be hard on yourself! I think this is a perfectly normal scenario for first time moms. I know for sure that I encouraged my firstborn to be more self-sufficient after Thing 2 was born. :-) We sometimes utilize Daniel Tiger (in many cases): "Try to solve the problem yourself, and you'll feel proud!" and "Keep trying, you'll get better!" He's my toddler guru.

Thanks, Grace! We haven't watched Daniel Tiger (it's all Blaze and trains here), but I have heard good things. We'll have to check it out.

Letting our kids fail is the only way they will learn sometimes. My daughter is only 16 months, so most of the "failing" is physical ;) and its hard to sit back sometimes and not rush to their side. I know that by letting her do things herself she is learning how and not expecting my assistance.

I totally agree. Thanks for stopping by!